These tapestries are a must-have for any Midnight fan! This iconic Sketchy Eddie design can now be yours in tapestry form. "Clancy Flippin" tapestries are made from a silky, shimmery fabric with an ultra luxurious look and feel. Combined with its vibrant colors, this tapestry is the perfect way to spice up your decor in any room.

This Clancy Flippin’ tapestry was the first piece I purchased from Sketchy Eddie. It was around when The Midnight Gospel was released and someone posted the image of this pin design. They sent me over to his Facebook group, The Art of Sketchy Eddie. The members there were all super helpful and directed me to his website. All the pins were sold out but the tapestry was still available. I figured “Why not? It’s the next best thing I can get.”

The tapestry arrived super quick and the production quality blew me away!!! It’s so colorful and the image is crispy for how massive this piece is.

Eddie cares so much about his art and his fans that anything subpar would never be released. This is the piece that hooked me and here I am a year and a half later still gushing over it. 🥰💙 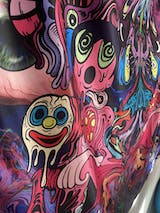